“ENGINEERED TO LEAVE NOTHING BEYOND YOUR CONTROL” —Chevrolet.com

John L Sullivan Chevrolet near Roseville has the perfect vehicle for your driving needs. Whether you need a car, SUV, crossover, truck or van, we will take care of you and get you driving home in a brand new 2015 Chevrolet Corvette, or any of our numerous used and certified pre-owned cars. Our vast selection of new, used, and certified pre-owned cars will satisfy whatever type of vehicle you're interested in. Come check out the 2015 Chevrolet Corvette nearby Roseville and surrounding communities, as we have attractive offers and incentives available.

Every gram earns its way onto the car

Completely redesigned, the 6.2L LT1 V8 engine boasts up to an estimated 460 horsepower and an available 465 lb.-ft. of torque, plus it achieves a 0-60 time of 3.8 seconds. A distinctive rear transaxle layout achieves optimal weight balance. A trio of innovative technologies rarely seen in any elite sports car achieves revolutionary power and fuel efficiency. Compact engine design lowers the hoodline and vehicle center of gravity. And a dry-sump oil system, available with the Z51 Performance Package, delivers through high g-force cornering. 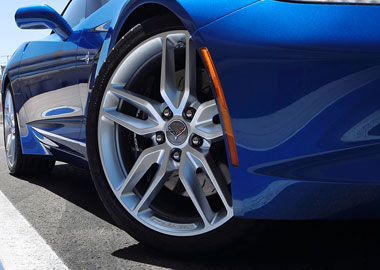 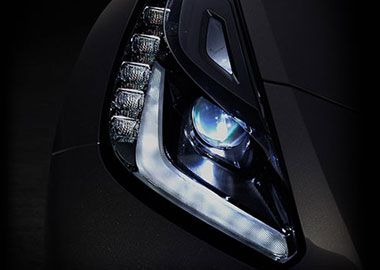 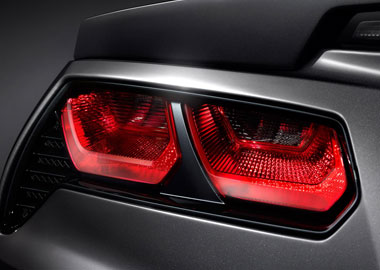 Napa leather, available on the 3LT trim level, is a testament to the finely crafted interior of the Stingray. Free from imperfections and soft to the touch, its smooth, natural grain dismisses the notion of synthetic textures. The 3LT package also includes a hand-stretched, leather-wrapped instrument panel swathed and sewn to meticulous fit and finish while lightweight aluminum accents adorn the doors, pedals, shifter and cockpit instrumentation.

The Instrument Panel Of The Future

The intuitive instrument cluster bears two ultra-bright 8-inch diagonal high-definition color LED screens — screens so bright they can even be read with the top down in direct sunlight. The center console entertainment interface features a retractable, tablet-inspired touch-screen complete with customizable home screen. And an available color Head-Up Display projects critical data into the driver’s line of sight on the windshield.

The standard GT seat begins with a lightweight magnesium frame and cradles the driver for optimal comfort and support. Precision hand-stitching hugs each and every contour. The 3LT trim level offers Grade A Napa leather or available sueded-microfiber inserts.

It’s already the quickest, most capable standard Corvette ever made. But Stingray has also evolved to keep you connected and entertained. The Chevrolet MyLink system begins with a retractable 8-inch diagonal high-definition color touch-screen. Using steering wheel controls, hand gesture recognition and voice recognition capabilities, you can talk and text hands-free, stream third-party music services like Pandora® Internet Radio, plus access a broad range of functions including OnStar® and available navigation.

Stingray offers a standard 4G LTE with available Wi-Fi® connection that’s more powerful than a smartphone or mobile hotspot. Through OnStar®, this technology gives Stingray an incredibly reliable Wi-Fi connection. The powerful signal gives you and your passengers the ability to seamlessly connect up to seven smart devices to the Internet, giving you the freedom to roam while connected.

Our safety philosophy emphasizes prevention with features such as Active Handling and 4-wheel antilock brakes to help you stay in control, while standard high-intensity discharge Xenon headlamps shed 900 lumens of light onto the road for excellent visibility. And if Stingray ever loses tire pressure, run-flat tires enable safe functioning for some distance at a moderate speed until the tire can be repaired.

In the event of a collision, Stingray is designed to help keep you and your passenger safe with seat-mounted head and thorax air bags, repositioned safety belt mounts, and a rigid aluminum frame structure that is 57% stiffer than the previous-generation Corvette steel frame.

You’re never alone with OnStar® Automatic Crash Response. Built-in sensors can automatically alert an OnStar Advisor, who is immediately connected into your vehicle and can request emergency help be sent to your exact GPS location — even if you’re unable to respond. Standard for the first six months.

Anything from the 2015 Chevrolet Corvette to the numerous used and certified pre-owned cars nearby Roseville, John L Sullivan Chevrolet has the means to get you driving back home in comfort. We guarantee you won't be disappointed even after just one visit to our friendly family here at John L Sullivan Chevrolet, assisting near Roseville and neighboring communities with first-class customer service one could want. With such desirable rewards programs, we trust we will earn your business for life. Our Owner Advantage Rewards Program offers plenty of great deals, offers, benefits, and more to show our appreciation to our faithful customers. We look forward to working together with you so you can leave our lot in the pristine 2015 Chevrolet Corvette or any used or certified pre-owned vehicle of your craving.

We're sorry, but we do not have a 2015 Chevrolet Corvette in our current inventory.