John L Sullivan Chevrolet near Elk Grove has the perfect vehicle for your driving needs. Whether you need a car, SUV, crossover, truck or van, we will take care of you and get you driving home in a brand new 2015 Chevrolet Equinox, or any of our numerous used and certified pre-owned cars. Our vast selection of new, used, and certified pre-owned cars will satisfy whatever type of vehicle you're interested in. Come check out the 2015 Chevrolet Equinox nearby Elk Grove and surrounding communities, as we have attractive offers and incentives available.

The 6-speed automatic transmission and available AWD provides refinement and responsiveness, no matter which engine you choose. 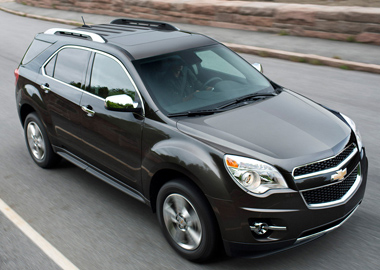 Equinox designers and engineers set out to create an uncompromising design with flowing lines and sleek contours that not only turns heads, but also helps to reduce wind drag and boost efficiency. 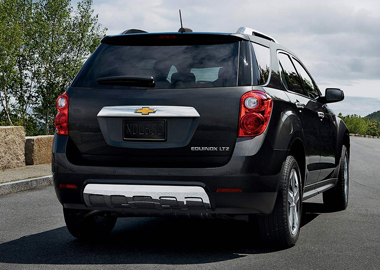 For even more refinement, Equinox LTZ is dressed with sophisticated chrome accents including door handles, mirrors and roof rack side rails. The lower front and rear fascias also feature bright accents to polish off the look.

Room For Your Passengers

Room For All Of Your Stuff

The Multi-Flex® sliding rear seat can also be pulled forward to add nearly 8 inches of cargo room, or folded completely flat to create 63.7 cubic feet of maximum cargo space†. And with a 60/40 split-fold design, ample storage compartments and an available programmable power liftgate, loading it all is that much easier.

The 2015 Equinox is the first car in its class with built-in available 4G LTE Wi-Fi® technology. With a powerful available 4G LTE signal, you and your passengers will have the ability to connect up to seven devices to the Internet via available Wi-Fi®.

The World's Just A Touch-Screen Away

Customize your driving experience by arranging the icons and features on the available Chevrolet MyLink 7-inch diagonal color touch-screen. Choose the information or options you use most and place them on your home screen. The interface allows you to touch and swipe on the screen just like you do on your smartphone.

Now you’re ready to bring your favorite music and entertainment with you. The available Chevrolet MyLink Radio works with your compatible smartphone and Bluetooth® wireless technology to stream music and entertainment through the Pandora® Internet Radio5 mobile app. Or you can listen to select commercial-free programs with the 3-month trial of SiriusXM® Satellite Radio. The latest Chevrolet MyLink Radio even allows you to store up to 60 favorites, including radio stations, contacts, music and other media.

Get an extra pair of eyes where you need them most with the available rear vision camera. The camera projects an image of what's behind your Equinox onto a 7-inch diagonal color touchscreen. It lets you see everything from telephone poles to kids on bikes.

Even the most careful drivers can't predict what might happen on the road ahead of them. That's where the available forward collision alert comes in handy. Smart camera sensors constantly scan traffic for stopped or slowing vehicles and alerts you before the risk of collision. That's piece of mind.

This smart technology uses a camera mounted near the inside rearview mirror to help alert you if you unintentionally drift from your lane without signaling, helping you keep safe during your daily commute, or anywhere else your travels may take you.

Anything from the 2015 Chevrolet Equinox to the numerous used and certified pre-owned cars nearby Elk Grove, John L Sullivan Chevrolet has the means to get you driving back home in comfort. We guarantee you won't be disappointed even after just one visit to our friendly family here at John L Sullivan Chevrolet, assisting near Elk Grove and neighboring communities with first-class customer service one could want. With such desirable rewards programs, we trust we will earn your business for life. Our Owner Advantage Rewards Program offers plenty of great deals, offers, benefits, and more to show our appreciation to our faithful customers. We look forward to working together with you so you can leave our lot in the pristine 2015 Chevrolet Equinox or any used or certified pre-owned vehicle of your craving.

We're sorry, but we do not have a 2015 Chevrolet Equinox in our current inventory.