“YOUR MOST VALUABLE TOOL.” —Chevrolet.com

John L Sullivan Chevrolet near Elk Grove has the perfect vehicle for your driving needs. Whether you need a car, SUV, crossover, truck or van, we will take care of you and get you driving home in a brand new 2015 Chevrolet Express, or any of our numerous used and certified pre-owned cars. Our vast selection of new, used, and certified pre-owned cars will satisfy whatever type of vehicle you're interested in. Come check out the 2015 Chevrolet Express nearby Elk Grove and surrounding communities, as we have attractive offers and incentives available.

Express Cargo Vans offer an available Duramax® 6.6L Turbo-Diesel V8, the most powerful diesel in its class. No matter the job, Express Cargo Van is ready to meet your business needs. 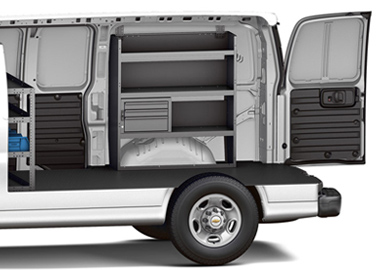 Contractors can opt for the adjustable shelving unit for more flexibility. 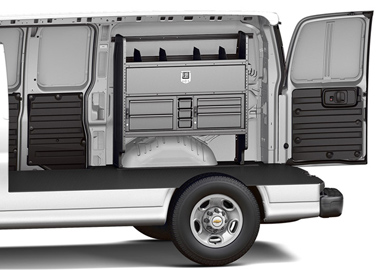 An elextrician can use the shelving unit with cover cabinets for a solid surface to stack modular drawers and bins. 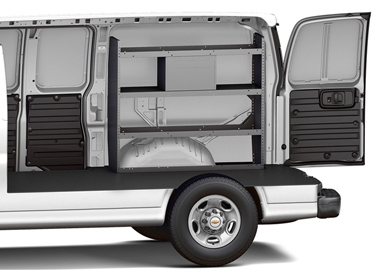 For plumbers, the shelving unit with drawer attachment keeps your tools organized.

Express Cargo Van is flexible and ready to accommodate anything. The Cargo Crew option offers available 5-passenger seating. Passenger doors and rear swing-out doors come standard for easy loading, unloading, exit or entry. With available options for the driver and every passenger, Express is the ideal work van to accommodate every need.

Forget looking for directions on your phone or fumbling around with your GPS. Simply enter the destination address and let the available navigation radio do the rest. You’ll love the easy-to-read and even easier-to-follow directions. And available OnStar makes in-dash navigation even better. Now, you can program and send destinations straight from the Internet or your smartphone to your navigation screen with eNav, or just push your blue button for help from an OnStar Advisor.

It’s All About Capacity

Advanced engineering and safety technology like the StabiliTrak® Electronic Stability Control System, standard on every Express Cargo Van, work together to help prevent collisions. Express offers optimal safety before, during and after a collision.

Working in conjunction with StabiliTrak, the Trailer Sway Control feature helps you stay on track. With auto grade braking, standard on Express 2500/3500 models, the 6-speed heavy-duty transmission downshifts automatically to help slow the vehicle when you apply the brakes while descending long, steep grades.

Anything from the 2015 Chevrolet Express to the numerous used and certified pre-owned cars nearby Elk Grove, John L Sullivan Chevrolet has the means to get you driving back home in comfort. We guarantee you won't be disappointed even after just one visit to our friendly family here at John L Sullivan Chevrolet, assisting near Elk Grove and neighboring communities with first-class customer service one could want. With such desirable rewards programs, we trust we will earn your business for life. Our Owner Advantage Rewards Program offers plenty of great deals, offers, benefits, and more to show our appreciation to our faithful customers. We look forward to working together with you so you can leave our lot in the pristine 2015 Chevrolet Express or any used or certified pre-owned vehicle of your craving.

We're sorry, but we do not have a 2015 Chevrolet Express in our current inventory.