John L Sullivan Chevrolet near Roseville has the perfect vehicle for your driving needs. Whether you need a car, SUV, crossover, truck or van, we will take care of you and get you driving home in a brand new 2015 Chevrolet Tahoe, or any of our numerous used and certified pre-owned cars. Our vast selection of new, used, and certified pre-owned cars will satisfy whatever type of vehicle you're interested in. Come check out the 2015 Chevrolet Tahoe nearby Roseville and surrounding communities, as we have attractive offers and incentives available.

The all-new Tahoe features a lighter suspension, to help improve fuel economy. Yet, it’s also stiffer to maintain the excellent ride, handling and capability that Tahoe is known for. The result: Front springs that are 25% stiffer than the previous generation, aluminum control arms that are lighter and stiffer, plus a coil-over-shock suspension that is precisely tuned for superior ride and handling. With lighter weight components, you won't have to sacrifice capability. Tahoe offers a maximum towing capacity of up to 8,500 lbs. — plenty of power to tow boats, ATVs and whatever else you want to bring along.

Wheels That Make A Statment Headlamps Power-retractable side assist steps 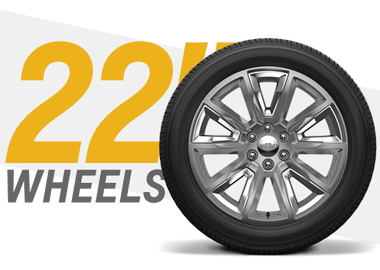 WHEELS THAT MAKE A DRAMATIC STATEMENT 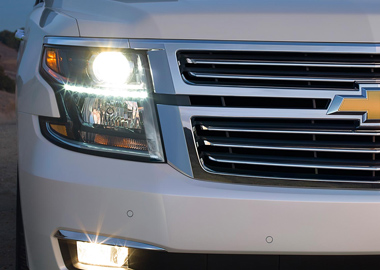 Details include a distinct available lighting package with standard projector-beam headlamps and rear LED taillamps, plus a hidden rear wiper system tucked under the rear spoiler at the roofline. 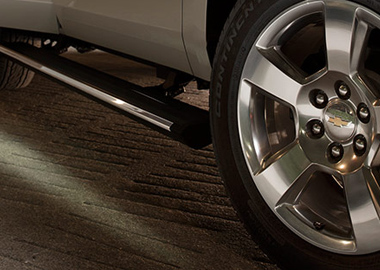 Tahoe also offers available power-retractable side assist steps with perimeter lighting, which help passengers exit more safely. And the handsfree programmable power liftgate ensures that you'll worry less about the liftgate hitting a garage door or being out of reach. A sensor under the rear bumper allows you to open the liftgate with a gentle kicking motion— which comes in handy when your arms are full of groceries.

The interior of the all-new Tahoe has been completely redesigned. Inspired by the craftsmanship of high-end wristwatches, the appearance of the instrument cluster is intricate and refined.

The new Tahoe interior features premium materials that contribute to the functional, sophisticated design. Storage in the center console is large enough to fit a laptop computer or hanging files. Plus, the available 8-inch diagonal color touch-screen slides up to reveal space behind the display to store cell phones, wallets or other valuables

Creating a quiet cabin environment was a major focus for our engineers when they designed this full-size SUV. Their noise-reduction efforts extended to other areas, including isolating noise in the engine compartment and using acoustic wheel liners to absorb road and stone-throw noise.

The next-generation available Chevrolet MyLink lets you customize the system to your needs and sync up to 10 devices via Bluetooth. Stay connected with your hands safely on the steering wheel using Bluetooth® wireless technology. Simply pair your compatible Bluetooth-enabled smartphone with Chevrolet MyLink or connect through one of the six available USB ports, and you can have access to your entire contact list, personal playlists and select mobile apps.

Connect From Every Seat

Bring your technology with you and stay completely connected wherever you’re headed, whenever you’re on the road. With up to 13 charging locations, including up to six USB ports and Wireless Charging to connect phones, plus a 110-volt three-prong plug to charge your laptop and other devices, you'll always stay connected in your Tahoe. Your devices can always stay charged thanks to Wireless Charging which eliminates the need for cords.

The all-new 2015 Tahoe features a host of available driver assistance technologies. Front Park Assist helps when maneuvering Tahoe in tight parking situations. Side Blind Zone Alert with Lane Change Alert use radar sensors in the rear quarter panels to detect fast approaching vehicles from up to 230 feet away in the adjacent lane or blind zone and warn drivers of their presence. Cameras and radar sensors surround the vehicle and operate together to help ensure drivers are aware of the road — and their surroundings.

The Foundation Of Safety

A strong frame is key to helping keep people safer. You can drive with confidence knowing that the all-new Tahoe has a reinforced safety cage with strategically placed crush zones to help maintain the integrity of the passenger compartment in the event of a collision. High-strength steel in the A- and B-pillars and roof rails and added roof reinforcements help improve safety in potential rollover collisions.

Anything from the 2015 Chevrolet Tahoe to the numerous used and certified pre-owned cars nearby Roseville, John L Sullivan Chevrolet has the means to get you driving back home in comfort. We guarantee you won't be disappointed even after just one visit to our friendly family here at John L Sullivan Chevrolet, assisting near Roseville and neighboring communities with first-class customer service one could want. With such desirable rewards programs, we trust we will earn your business for life. Our Owner Advantage Rewards Program offers plenty of great deals, offers, benefits, and more to show our appreciation to our faithful customers. We look forward to working together with you so you can leave our lot in the pristine 2015 Chevrolet Tahoe or any used or certified pre-owned vehicle of your craving.

We're sorry, but we do not have a 2015 Chevrolet Tahoe in our current inventory.